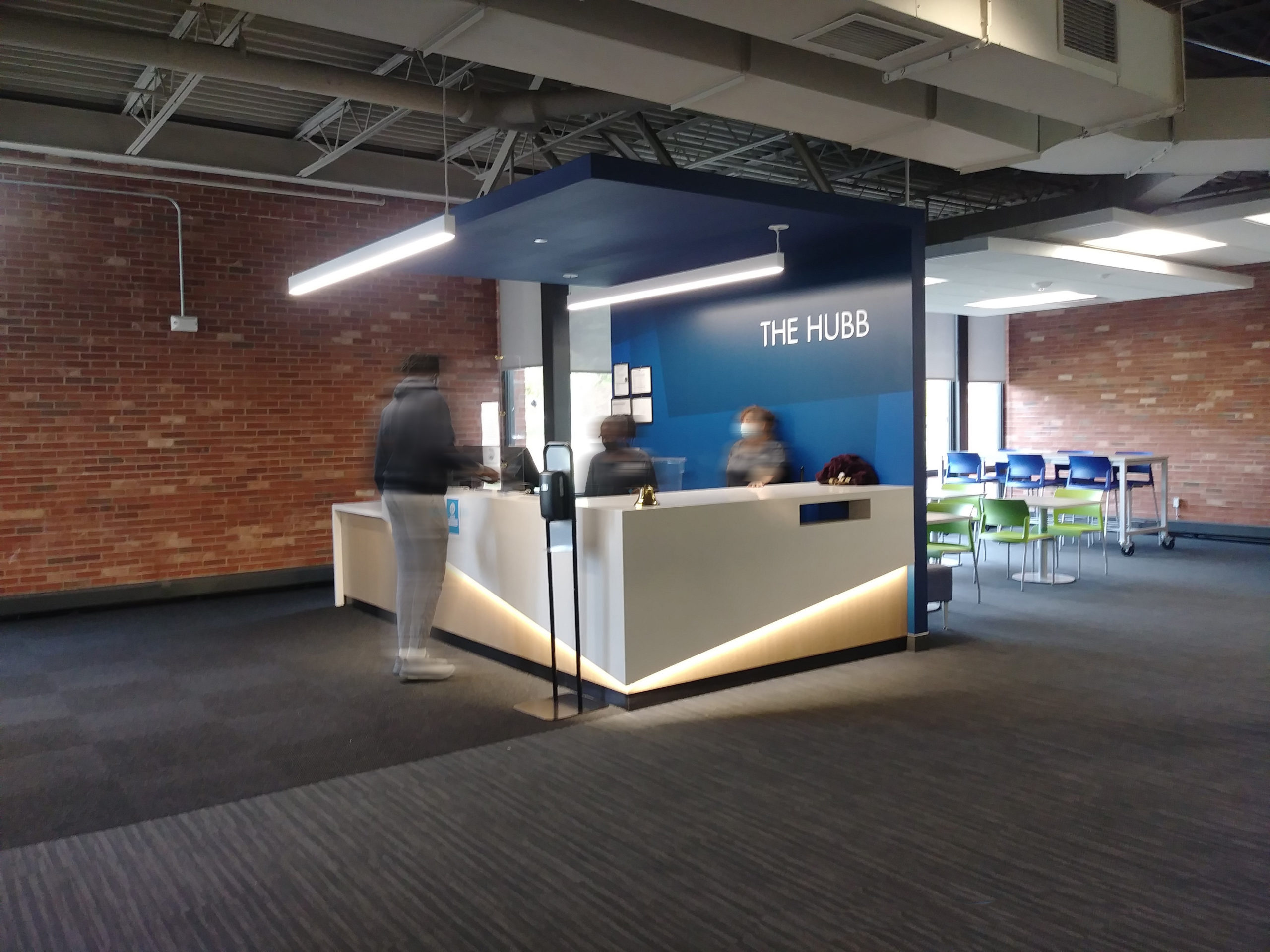 After Drake University agreed to a 10-year extension with its long-time food service provider, Sodexo, the university committed to a renovation of its Hubbell Dining Hall on campus. Story had completed three other projects with Drake over the past two years – two of those with INVISION, as well – and was hired for the renovation in the 67 year old building.

Having completed an HVAC upgrade in the Quads Residence Halls over the summer term of 2018, Story and Drake University were comfortable setting an aggressive schedule for the completion of the dining hall renovation.

Set in the beautiful site of the Quads dormitories, the Hubbell Dining Hall retains much of the classic modern exterior aesthetic and seamless integration into the landscape since the day of its introduction on the Drake University campus. Through renovations and expansions over the years, the interior layout had separated into fairly closed off areas of the building. To address client wants, needs and concerns with the building, the team’s project design focused on three key strategies: enhancing the student experience in the dining hall; respect of the iconic architecture while creating modifications and insertions that remained focused on client needs; and design excellence in strategy, material selection and detail.

“Partnering with Story on Target Value Design in pre-construction proved to be an effective tool in managing and goal setting for each of those strategies,” said Kerry Weig, a principal architect at INVISION. “The design team set and achieved the goals of preserving the modern architecture, of taking advantage of the site settings to create dining zones with strong visual connections to campus, and to connect two dining zones into a cohesive dining facility.”

The renovation included gutting most of the kitchen and performing architectural upgrades (paint, carpet, furniture and some framing) to the dining areas. New food service equipment was purchased and installed in the renovated kitchen areas, and most of the building received new electrical, mechanical and plumbing, including an upgraded mechanical room and sprinkler system. Other equipment installed includes walk-in freezer/cooler and a dishwashing system.

“I’ve been through seven or eight medium to large dining hall projects, and they’re difficult on a good day,” said Rob Ebel, Construction Project Manager for Drake University. Rob joined Drake’s facilites team in the early part of 2020 after spending 13 years in a similar role with Iowa State University, working with Story most recently on the Gerdin Business Building expansion.

Not only was the project team able to maintain the construction schedule, but the project was completed one week earlier than originally planned. Drake students were brought to campus a week ahead of schedule in order to account for COVID-19 precautions, so the team amended the construction schedule so the dining hall could make meals for students arriving to campus.

“We had to lean on Story more than usual, and it was one of the best instances of crews just doing whatever it took to keep the project moving as I’ve ever seen,” Ebel said. “There was no arguing about who was responsible for what. It was just an all around team effort, and Story really set the tone for that early on.”

Story’s recent prior work for the university includes renovating the Drake Relays meet operations room and bringing a full-service Starbucks to the Olmstead Center, also done in coordination with Sodexo and INVISION Architects.